When to travel to Mauritius?

So, it’s decided! The island of Mauritius is your next holiday destination!

Now, before you start to look for things to do in Mauritius and change your Facebook status to “travelling to Mauritius”, are you sure you have chosen the best time of the year to visit Mauritius? It could be the rainy season. Or worst, it could be the cyclone season in Mauritius. 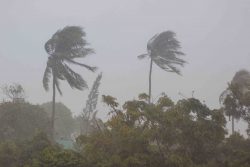 So, what is the best time of the year to visit Mauritius? First, let’s answer this question:

As a tropical island, Mauritius enjoys pleasant warm temperatures throughout the year. There are only two seasons in Mauritius: summer and winter. We just ignore the other two seasons (spring sprung off and fall fell off).

The mean temperatures range between 20.4°C in winter and 24.7°C in summer.

Despite the very tiny 4.3°C variation between these two seasons, summer and winter in Mauritius can be quite different.

However, to make matters more complicated, Mauritius has micro-climates. This means that weather can vary significantly between regions; it could be raining in Port Louis and blue skies in Grand Baie.

So, it’s not only about the best month to visit Mauritius, it’s also about the best region for a particular month you want to travel to Mauritius. We’ll leave that for another blog post…

For now, let’s focus on the general differences in weather between summer and winter in Mauritius. 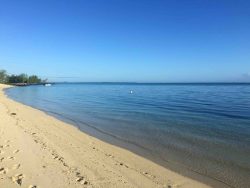 Photo taken in February on the east coast of Mauritius

Summer in Mauritius starts around November and lasts until about April. The mean summer temperature across the island during those months is 24.7°C. The hottest months in Mauritius are January and February, with an average day maximum reaching 29.2°C.

The weather during some of the summer months warms the water to a lovely 27°C around the Mauritian coast. However, these create ideal conditions for tropical cyclones.

The cyclone season in Mauritius is usually between January and March (officially it is between 1st November and 15th May). Cyclones can be very dangerous; winds can exceed 200km/h! You can read more about the precautions to take during a tropical cyclone in Mauritius here.

Photo taken in July on the west coast of Mauritius

Winter in Mauritius is from May to October, and the mean temperature during those months is 20.4°C. The coldest months in Mauritius are July and August, with an average night minimum dropping to 16.4°C. The sea temperature around the coast of Mauritius during these month average to about 23°C.

The winter months on the island are usually dryer than the summer months. The average rainfall during the winter months in Mauritius is 670mm, and the month with the least amount of rainfall is October.

On average, the winter months in Mauritius tend to be windier than the summer ones, with trade winds generally blowing from the South-East. The month with the most wind is August, where the average wind speed across the island is 13.7km/h, with stronger winds along some parts of the coast. An illustrated summary of summer and winter weather in Mauritius

What is the best time of the year to go to Mauritius?

It’s up to you to decide which month best corresponds to the weather you seek in Mauritius. If you want to kite surf, August is probably your month. For us, the months we recommend for pleasant weather are October, November and May. You might also get some cheaper flights or hotel deals during those months as they do not fall in Mauritius’ peak season.

The truth is, it’s impossible to forecast the exact weather during your vacation in Mauritius…

If it’s cloudy, rainy or windy, it may not be ideal for a beach day; you can leave the tanning (or sun-burning) for another day. Food tour with Taste Buddies during a Cyclone warning class 2

Instead, you could visit a museum, or go find a local restaurant to eat some authentic Mauritian food, or better yet, go to more than one restaurant and taste a variety of local Mauritian food – go on a food tour!

Just promise us this: do not hide in your room and waste your day away!

Mauritius is much more than beautiful beaches and warm waters.